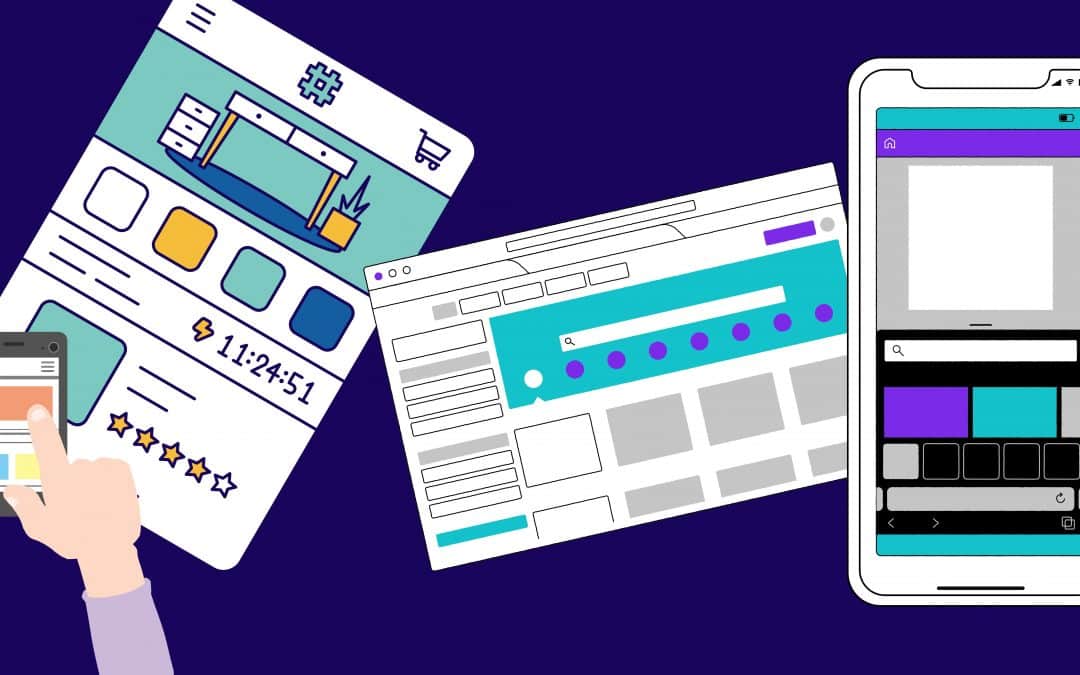 What is Rapid Prototyping?

Rapid prototyping accelerates the prototyping process. It’s the quickest way to settle on a solid app design, so you can start presenting your ideas to investors and real-world customers or potential users. After an initial rapid prototype is drafted, the process can advance quickly through rounds of feedback and iterations.

Prototyping with this agile method is also preferable from a budget perspective. Rapid iterations will push your prototype out of a nebulous idea phase and into a hi-fi prototype. You can gather and synthesize feedback to make improvements while tossing out what’s not working. It helps you catch pain points earlier, so you can eliminate these issues early in the design process before it makes it to code. Founders have great ideas, however, without testing and gaining feedback from their target audience, they often tend to focus on designing and building the “wrong” things at the start.

To start creating your rapid prototype, you should be aware of some of the great prototyping tools on the market. All of the tools mentioned below are available for free, but you may need to upgrade to a paid subscription to support more active users and advanced features. Let’s take a closer look at our top 4 recommendations:

Figma is a great prototyping tool and cloud-based vector graphics editor. According to the 2020 Design Tools Survey, Figma is the best design tool, winning 6 of the 8 survey categories.

Figma includes a comprehensive component library and offers gesture simulations and animations. You can design responsively, thanks to Figma’s Auto Layout feature. And your team can take advantage of widgets and plugins that make prototyping a breeze. You can test your prototypes live on both Android and iOS and record the testing session for later playback.

Figma offers fantastic collaboration tools, so your team can work together on the project, viewing edits in real-time. Team members can comment on different aspects of the prototype and review the version history. All assets created for your prototypes are kept in a nicely managed assets library.

InVision is a highly reliable and very popular prototyping tool. It offers most of the features found in Figma so that you can create beautiful vector-based screen designs. It’s easy to create interactive prototypes and test your designs, so your team can confidently move into the development stage.

InVision has some of the best collaboration features available. Your team members can comment directly on your prototype, view the version history, and update your prototype on the cloud. It’s simple to sync your prototype to Google Drive, Slack, or Drop Box for easy sharing.

Marvel’s POP, or Prototyping on Paper, is one of the quickest ways to bring your ideas to life. Simply draft your ideas as wireframes onto paper and take pictures with the POP iOS or Android app. You can then select distinct components of your wireframes to link to other wireframe pages. There’s no need to learn complex design tools to get started. Draft your prototype in a few minutes and start sharing to get feedback on your ideas.

Origami Studio is a free prototyping tool created by Facebook designers. You can create high-fidelity prototypes with ease and then preview them on mobile devices. Origami Studio lets you intuitively add functions and logic to your prototypes. The tool supports scrolling views, horizontal scrolling, screen transitions, and timed transitions. Ultimately it’s similar to Figma but lacks enhanced team collaboration features.

If you want to advance through the prototyping process as quickly as possible, start with a static prototype or wireframe before moving on to a functional prototype. Iterate aggressively to trash any ideas that aren’t getting great feedback. Then you’ll be ready to create an actual high-fidelity proof of concept prototype with which users can start interacting. Let’s learn more about these three main phases in the rapid prototyping process:

1. Start with a static prototype (Use POP!)

In the past, prototyping usually started on paper. Now you have access to many amazing prototyping tools, so you don’t need to prototype on paper if you don’t want to. But paper prototyping is accessible to everyone.

If you are not a UX/UI designer, you might not be familiar with tools like Figma and Origami Studio. To keep the prototyping process lean and quick, there’s no time for you to learn an entire design tool when you’re trying to express your ideas.

The POP app is a great option here. You can sketch your ideas, outline the main features, and highlight your value proposition with a few rough wireframes. It doesn’t have to be neat or perfect. Then you can upload your drawings to pop and start linking the images together, just like they’d be in the actual app.

With a rapid prototype outlined on paper or created with POP, you can hand off these ideas to a UX/UI designer to bring to life in a functional prototype. Once functions are added, your startup can start seeking early user observations and creating more realistic user experiences. This is the stage for discovering usability issues and other gaps in the user experience. A functional prototype can start as just a landing page or can expand into a full website or app prototype.

High-fidelity prototypes, created with tools like Figma or InVision, take way more work than image-based tools but are equally more effective at measuring behavior and interactions from potential users. At this stage, your prototype needs to be real enough to start testing perception, onboarding, profile creation, and other core features. Anyone that reviews your prototype should clearly see your value proposition within the design.

Consult A Specialized Software Development Agency for Next Steps

With each iteration during rapid prototyping, your startup will move closer and closer toward a final high-fidelity rapid prototype. You’ll know you’re close when you are making fewer and fewer changes between each version. If your team is satisfied with the feedback from potential customers and investors, it’s time to move to the MVP phase. An MVP will put your ideas into customers’ hands for the first time. But first, you have to build it!

Modern Launch is a software development agency with established processes and product development pipelines to help you design and develop your app. Our talented project managers and developers have worked with startups and high-growth companies in many industries. We work closely with our clients to build prototypes and custom applications according to their specifications. If you are looking to start prototyping or building your minimum viable product (and later versions), Modern Launch is here to help.

We hope you found this article helpful. If you have any questions or comments, feel free to reach out to us.

Here’s how you can get in touch with us:

No comments to show.